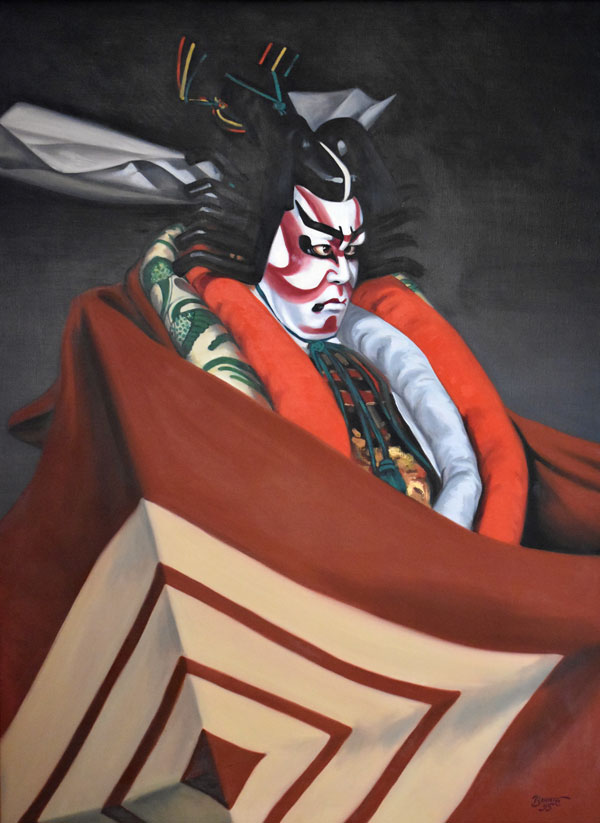 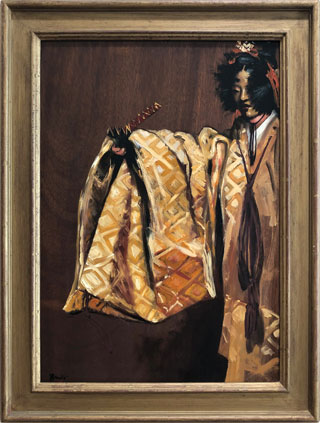 In the last thirty years, Scottish artist Paul Binnie has become well known for his woodblock prints as he is one of very few artists who dynamically reinvigorates this ancient art form for the modern world. He handles all aspects of production, designing, carving, and printing the woodblocks himself, a method he studied in a traditional apprenticeship in Japan.  During the almost six years he spent mastering woodblock carving and printing, his immersion in the culture brought him into contact with the milieu of the Japanese theater, which became a major theme of his work during his period of residency.

Binnie’s stencil and woodblock prints of the great Kabuki actors of the 1990s are well known, as he frequented the Kabuki-za, the Tokyo home of this theatrical form, both as an audience member and behind the scenes as an assistant earphone guide commentator.  He befriended several Kabuki actors in his time, visiting their ‘gakuya’ (dressing rooms), and has since gotten to know the younger generation of actors who are now taking important roles. Living in the Sendagaya district of Tokyo, he was likewise well-situated to regularly attend performances at the National Noh Theater which was only a few blocks away.  This proximity inspired a series of nearly 80 oil paintings of Noh subjects, some of which were based on his own collection of historic Noh masks as well as portraits of several Noh performers who he met through his contacts in the Kabuki theater. 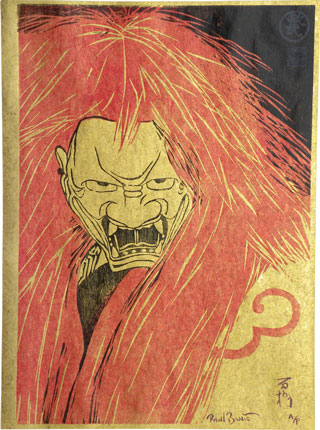 Why the separation of woodblocks for Kabuki and oil painting for Noh? As a print collector, Binnie realized that there was a strong history of Kabuki images in woodblock and his own Kabuki actor portraits could fit into that continuum, providing a modern view which would also resonate with past artists, especially those of the shin-hanga movement between the two world wars. Most historic imagery of Noh is limited to paintings mounted as scrolls, in albums and on fans, with the exception of one artist in the Meiji period who made a large number of rather restrained woodblocks of Noh subjects around 1890-1910. Trained as an oil painter, Binnie was naturally drawn to the lush silks and brocades of Noh and the expressive potential of masks of different sorts. His fluid brushwork and lush paint effects seem to capture the mysterious beauty of Noh performance, just as his incisive carved line captured Kabuki. There were a few crossovers: Binnie made one woodblock print of Noh, the very rare early Shakkyo of 1997, and several oil paintings and watercolors of Kabuki actors, perhaps the finest of which is included in the current exhibition, Shibaraku.

Scholten Japanese Art is located at 145 West 58th Street, Suite 6D, between 6th and 7th Avenues.  For the duration of the exhibition, June 16th - July 15th, the gallery will be open by appointment,