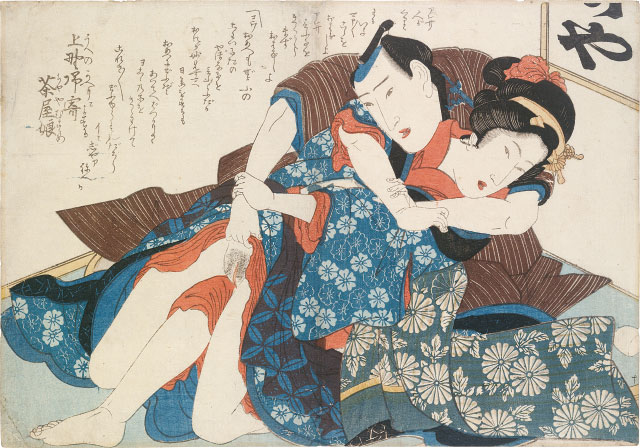 the eighth design from an album of twelve prints; a teahouse waitress at Ueno tries to resist the advances of an amorous customer, a small porcelain cup is knocked over in the struggle, ca. 1825-28

The waitress is not compliant and protests: "Somebody might be coming!" but he insists "Take the bottom off!" and manages to lift her kimono hem.

The son of the calligrapher and poet Ikeda Shigeharu, Eisen studied painting with Kano Hakkeisai, a senior student at the Kano Eisen-in studio. He later boarded at the house of the genre painter, Kikugawa Eijiri (where he met Eijiri's second son, the artist Kikugawa Eizan (1787-1867). Although they were only four years apart, according to Richard Lane, he became Eizan's student who gave him the name Eisen in 1816. Eizan was a friend of Totoya Hokkei (1780-1850), a leading student of Katsushika Hokusai (1760-1849). Both Eizan and Eisen display considerable influence from Hokusai, particularly in their shunga compositions. Lane notes that although Eisen developed his own ukiyo-e style which was influenced by Eizan, his shunga prints display greater influence from his 'true' master, Hokusai.