BACK
index of the exhibition
NEXT 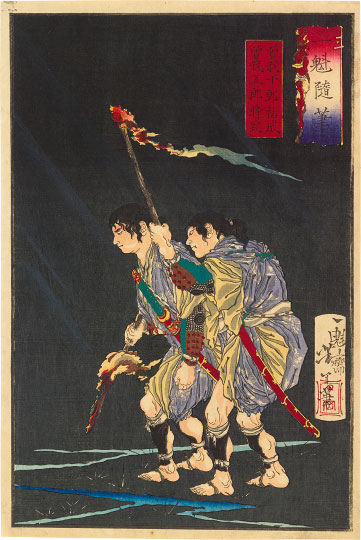 The Soga Brothers, Goro and Juro, were medieval warriors whose lives were recounted in the 14th-century novel The Tale of the Soga (Soga monogatari). The historical tale of the two brothers, which would be retold, elaborated, and embellished in numerous kabuki, Noh, and bunraku (puppet theater) plays, centered around the death of their father and the subsequent vendetta they declared against his killer, Kudo Suketsune (d. 1193). In some adaptations, they attempt to recover an artifact (often a sword) stolen by the killer. A few kabuki plays, most memorably Sukeroku, feature one of the brothers in disguise attempting to avenge his father's death. In this composition, they are depicted in the rain entering Suketsune's camp. Though they would kill Suketsune in this brazen night raid, Juro was slain in the ensuing fight. His brother would not last much longer. In spite of his heartfelt desire to pardon the young warrior, the Shogun would be compelled to execute Goro the very next day.